You can currently purchase Land the following ways.

You can currently purchase Totems the following ways. 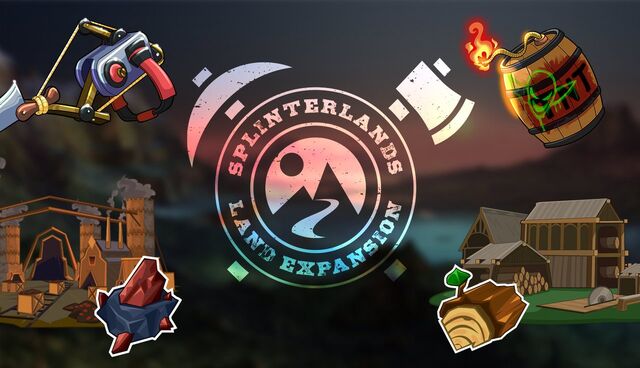 The Splinterlands team is excited to release additional details about the next planned expansion for the Splinterlands game. This is by far the biggest update we have undertaken since building the game initially, and we expect it will take the entire Splinterlands ecosystem to a whole new level of both value and fun.

Not only are we planning to add new types of cards and a major update to the existing battle system, but we are also planning to add an entire additional game within the game to allow players to take control of the minting of the new cards. We think that this expansion will be groundbreaking - not just for Splinterlands - but for the entire blockchain-based gaming industry!

For those of you who are as excited as we are, and want to get involved early, we are planning to hold a presale for land in the Splinterlands in order to help fund the development of the expansion. You can find more details about the presale and all of the benefits and discounts being offered to participants in a companion post to this one which will be linked below.

The expansion will add two completely new types of cards to Splinterlands - Items & Spells - in addition to the current Monster and Summoner card types. Currently, players choose their Summoner and Monster cards for their team and then the battle plays out against their opponent's team with no ability to alter the results after that point.

The most important thing to understand when it comes to the value of land in the Splinterlands is that the new Item & Spell cards will NOT be available in booster packs like their Monster & Summoner counterparts.

Instead, they will be minted exclusively by players using resources and buildings that are harvested from or built on the land. This means that any players who wish to acquire Item & Spell cards for use in battles will either need to mint them for themselves, or buy them on the market from other players who have minted them. Splinterlands will NEVER sell Item & Spell cards. 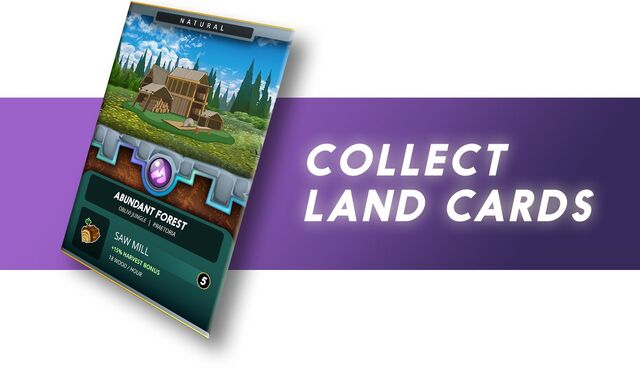 The smallest unit of land is a Plot, and each Plot will be a unique non-fungible token (NFT) represented by a card graphic that displays all of its unique properties as well as indicate what type and level of building is currently built on it. Each plot of land will have a terrain type, a category, and a rarity.

The terrain type indicates what sort of land it is, what types of resources it can have, and what types of Splinter magic are best suited to that land. There are planned to be fourteen different terrain types in total: Plains, Hills, Tundra, Swamp, Bog, Mountain, Canyon, Caldera, River, Lake, Forest, Jungle, Desert, and Badlands.

In addition to the terrain type, each plot of land will also be in one of three categories - Natural, Magical, or Occupied. The category of land is similar to the "foil" of the existing Monster and Summoner cards and is indicated at the top of the card graphic. The majority of the land plots will be Natural lands, which means that they contain one of four natural resources (grain, wood, stone, and ore) which can be farmed or harvested from the land and will be required to build, upgrade, and maintain all of the various buildings that can be constructed.

Some land plots will be Magical, which means that they are rich in one of six magical resources, each associated with one type of Splinter magic - Virtulium (Life), Reclaimed Souls (Death), Ulana Seeds (Earth), Sparkstone (Fire), Bottled Storms (Water), and Heliostones (Dragon). The magical resources will be much more rare than the natural resources and will be one of two components required to mint Item and Spell cards.

Additionally, some land plots will be Occupied, which means that they are inhabited by wild monsters. Players can battle these monsters and extract their Essences, which will be the second necessary component of minting Item and Spell cards along with the magical resources.

Finally, each plot of land will also have a rarity - Common, Rare, Epic, or Legendary - just like the existing Monster & Summoner cards. The rarity will determine how abundant the natural or magical resources are on the land, or how many monsters there are on an Occupied plot, and will be indicated by a modifier that is part of the plot's name.

You may receive a Fertile (Rare) Plains, an Abundant (Epic) Swamp, or an Overflowing (Legendary) Jungle. Common rarity plots will not have any modifier before the terrain type. A land plot that is both Overflowing (Legendary rarity) and is either the Magical or Occupied category can be thought of as similar to a Gold Foil Legendary Monster or Summoner card.

In order to utilize the land it will be necessary to construct buildings on it. Only one building can be on a single plot of land at any time. There will be many different types of buildings that can be built, each with a specific purpose. The different categories of buildings are:

Each building will require some combination of the natural resources to build, upgrade, and maintain, and each building will be able to be upgraded to higher levels in order to boost productivity. Constructing and upgrading buildings will also take time, and the amount of time will increase as the buildings are upgraded to higher levels. It will be possible to spend Dark Energy Crystals (DEC) to speed up the construction process, and any DEC spent in this way will be burned.

Most buildings will also require some existing Monster and Summoner cards to "work" in them in order to function, so you may want to hold off on burning your hordes of Rusty Androids! Additionally, Monsters and Summoners from certain Splinters will be better suited to working on specific types of buildings and land plots. For example, Fire Splinter Monsters and Summoners will perform better on a Mountainous land plot than on a Lake.

Buildings can also be destroyed by their owner and a certain percentage of the resources used to build them can be recovered in order to make room for a new building on that plot.

Lastly, there will also be two special types of buildings - the Castle and Keep - which are pre-existing on certain land plots and cannot be destroyed or removed in any way. These buildings will confer special benefits to their owners and also to the surrounding areas. Each Region (1000 plots) will contain exactly one plot with a Castle and nine plots with a Keep (one in each Tract (100 plots) except for the Tract that contains the plot with the Castle).

The end goal of owning land is to mint the new Item and Spell cards which will then be able to be used in Splinterlands battles. There will be specific buildings that can be built for minting item and spell cards, and, like the other buildings, they will require Monster and Summoner cards to work in them.

Unlike some crafting mechanics in existing games, in Splinterlands it will not be possible to choose exactly which Item or Spell you wish to mint. Instead, the resulting Item or Spell will be randomly determined based on a number of factors, including, but not limited to, the level of the building, the Monster & Summoner cards working in the building, the types of Essences used, and bonuses from special Totem artifacts placed in the building (more about the Totems below).

Magical items known as "Totems" have been discovered scattered across the lands of Praetoria. These ancient artifacts from civilizations long forgotten have been imbued with magical energy that can provide significant benefits to players that can harness them.

Each Totem will be a tradeable NFT item just like the existing Monster and Summoner game cards and the upcoming Land Plot cards, and they can be placed in buildings to provide specific benefits.

Each totem will provide one very specific type of benefit, for example it may speed up Death Splinter Item card minting time, increase the rate of Sparkstone harvesting, or reduce the maintenance cost of a Farm building.

Totems will have Common, Rare, Epic, and Legendary rarities, with the more rare versions giving larger benefits than more common ones.

Initially, Totems will ONLY be available as prizes in the Splinterlands Land Raffle, which you can read more about in the Official Land Presale Announcement post, however, once the land expansion is live there will be additional ways that players may come across these rare and valuable items which have yet to be revealed!

Please keep in mind that the details of the expansion are still very much in the design phase, and certain elements may change from what is described here by the time the expansion is completed and released.

The goal is to not only add a new element of skill and interaction to the battles, but also to provide a very deep, fun, and challenging empire-building game mechanic where players can learn and discover a myriad of different ways to optimize the value that can be extracted from their land and carve out their niche in the overall supply chain of Item & Spell production. Whether you have one plot or one thousand plots, there will be an important role for you to play.

This is your chance to take part at the ground floor of an exciting and groundbreaking game mechanic where the creation of new collectible game cards is put into the hands of the players.

Community content is available under CC-BY-SA unless otherwise noted.
Advertisement